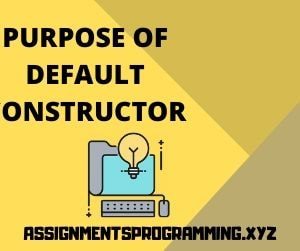 A program which has a constructer without parameters is called “Default Constructor”. As we know object is nothing but an entity which has its own states and behavior meaning that it has its own data member and function member. So, here "construct the object" in turn it means that constructing the data members of the object you create. Default constructor is something which is useful to initialize the data members (Variables) to their default value when you create any object.